Pelvic Inflammatory Disease (PID) refers to an inflammatory condition in the female reproductive system above the internal os of the cervix. It can be due to a bacterial, fungal or viral infection though bacterial infection is more common.

Organisms that are notable in PID conditions are, Neisseria gonorrhoeae and Chlamydia trachomatis, even normal vaginal flora can be involved. The infection can be due to a single species of organisms or a co- infection of many different organisms.

World Health Organisation (WHO) estimates that worldwide over 340 million new cases of four curable STIs ( gonorrhoea, chlamydia, syphilis, and trichomoniasis) occurred in 1999 in men and women age 15-49. In sub-Saharan Africa, the WHO Global programme estimated the prevalence of STIs at 208 million cases, with an annual incidence of 65 million (WHO, 1995)

32 Prevalence of PID in Nigeria is high, particularly among young adults. A study done in Port Harcourt, Nigeria put the prevalence among undergraduates at 11%. 5 Prasad et al24 in a similar study reported a prevalence of 14% among young women in India.

There are limitations and constraints associated with making an etiological diagnosis based on laboratory evidence, apart from research settings, most of the diagnosis and management of STD patients is based on the syndromic approach.

PID could be a result of an untreated sexually transmitted disease, abortion childbirth, miscarriage or post pelvic operations. It can be diagnosed using laparoscopy, pelvic scans and histology smears. However there are other conditions that have to be considered when diagnosing the disease and they include appendicitis, ectopic pregnancy, hemorrhagic or ruptured cyst and twisted cyst.

PID can be cured but its effects can be permanent hence early treatment and regular screening of individuals at a high risk of STIs is important since gonococcal infections are asymptomatic. Treatment generally involves antibiotic therapy and the drugs are given either orally or intravenously. Untreated or late treated PID has serious complication such as infertility, ectopic pregnancy chronic abdominal pain.

Prevention strategies include avoiding STIs and early treatment of the symptoms for any STI or PID which include; pain during intercourse, abnormal vaginal discharge and fever.

In Uganda the rate of infertility is high and the most probable cause is risky behaviours which people always engage in, this has led to people acquiring different infections which have led to P.I.D , a disease people hardly know anything about.

Early identification of the disease is a major preliquisite to prevention and controlling of the disease, however with the various myths and inadequate information about the disease many people are at a high risk.

Despite the above troubling information there has not been any reported study in Uganda on the awareness of PID among the youth. This research will therefore serve to add knowledge on the awareness of this debilitating disease that has great impact on both the spread of HIV and infertility. 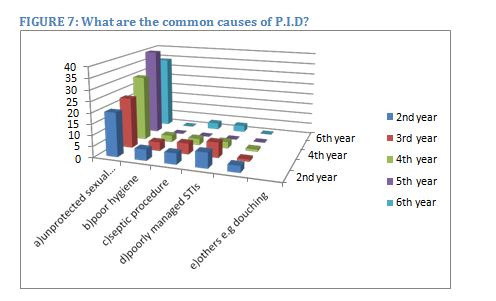 Prevalence of sexually transmitted diseases among blood donors in Nigeria

Infertility among married couples in our lady of Lourdes Hospital Complex

Rhesus D Variants among Pregnant Women in the Northern Nigeria

BIOCHEMISTRY OF VISION IN INFANTS

A COMPARATIVE ASSESSMENT OF VISION IN INFANTS AND CHILDREN

Phlebotomy, A Bridge Between Patients And Laboratory

× Chat With Us On Whatsapp